We scan bound books of Any Size, Shape, Style & Condition

When the Boles Fire of 2014 destroyed 150 homes and eight commercial properties in Weed, California, in September 2014, it also destroyed a tremendous amount of recorded history. Two long-standing church buildings, Holy Family Catholic Church and Grace Presbyterian Church, which faced each other in Weed, were completely destroyed.

Consumed in the fire were the complete archives of both congregations: records of births, deaths, weddings, financial contributions and other historical happenings were lost forever. To make matters worse, Holy Family had also been storing the historical records of Holy Cross Catholic Church of Tulelake. 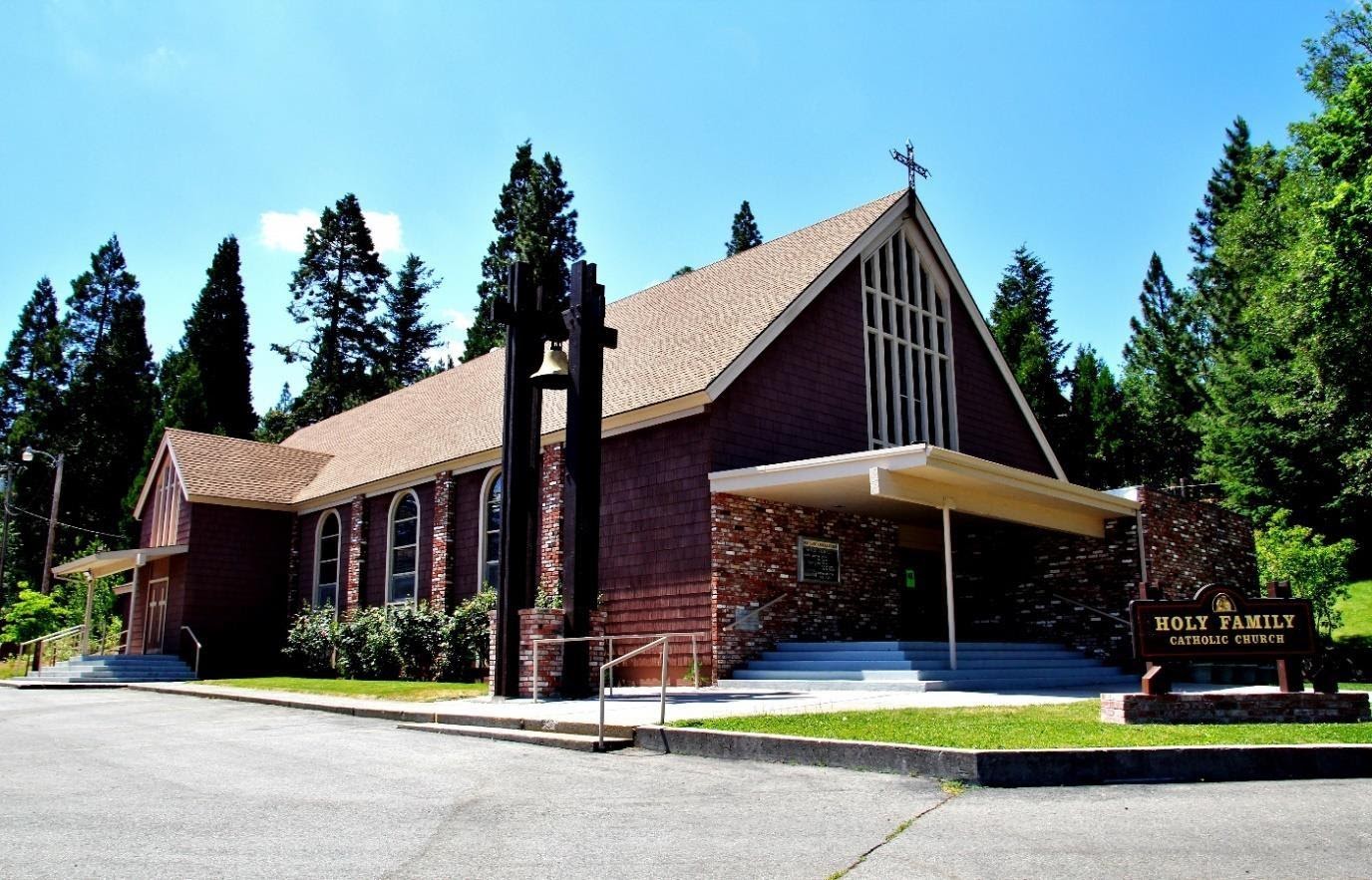 Digitizing Your Church Records - A Big Idea Whose Time Had Come

The first thing that came to Fr. Boll's mind was the lost archives of the Holy Family and Holy Cross churches. When he met with Ron Alexander to discuss the possibility, it quickly became apparent that the scope of such a project far exceeded the capabilities of Ricoh. Alexander was able to locate a digitization firm with the reputation of being able to deal successfully with large volumes of work, eRecordsUSA, in Fremont, California. Despite the size of the project, eRecords committed to undertake it.

There seemed to be two shared awarenesses as the concept of the project moved forward. One was a common recognition that it was a massive undertaking that involved gathering and transporting the priceless documents and then entrusting the huge task to eRecords.

And based on memories of the recent Boles Fire, the second awareness was the need to safeguard the records. Clearly, the task had to be accomplished. At the same time, the organization and the work were overwhelming.

Later in 2015, at the behest of Bishop Soto and the Presbyteral Council, and overseen by Fr. Boll, eRecords agreed to begin digitalizing the documents of one deanery, or group of parishes, per month.

This involved not only the work of digitalizing but also of gathering and transporting hundreds of thousands of documents. As a sort of trial run, the work began with the Siskiyou Deanery, which was the smallest in the diocese, rendered even smaller because two of its parishes, Holy Family and Holy Cross, had just lost their records in the Boles Fire.

The team at eRecords was well-prepared and easily handled the initial documents ahead of schedule. Indeed Pankaj Sharma, the owner of eRecordsUSA, who was leading the digitizing work, finished the Siskiyou Deanery records so quickly that they decided to attempt the completion of not one but two deaneries a month.

Their work became much more complicated with the delivery of the next two sets of archives from the Shasta and Sutter Buttes parishes, 18 congregations. Ultimately it would take almost four weeks per deanery to get the work done. Somehow, though, the digitizers still managed to finish ahead of schedule.

The project was nervewracking for all involved, in part because the fragile documents had to be transported from the Sacramento Diocese to eRecords. The monthly back and forth deliveries between the parishes and eRecords in Fremont involved a 300-mile, five-hour one-way trip down Interstate 5. Once in Fremont, the eRecords team had to maintain the searchable, indexed order of the documents, made of up a wide variety of sizes, bindings, and conditions.

Between October 2015, and July 2016, all the archives of the Sacramento Diocese were digitalized, a 10-month process. Considering the age of the many of the documents and record books, some dating back to the 1850s, it’s all the more amazing that no harm came to any of the archives during transportation or the digitizing process itself.

Before beginning the process, Fr. Boll could only estimate the number of documents and books that would have to be digitized for preservation. In the final analysis, 12 deaneries comprising 107 parishes, not counting the two parishes lost to the Boles Fire. The largest parish in terms of archives was the Cathedral of the Blessed Sacrament in Sacramento, with 13,500 pages of archives.

The largest deanery was the City deanery of Sacramento, with more than 57,000 pages. In total, the project digitized more than 325,000 documents. This amounted to the digitization of more than 1500 pages a day or approximately 190 pages an hour.

Following digitization, the original documents were all returned, first to the diocese offices, and then to each parish. This work was overseen by the deans of the diocese.

That eRecords was able to complete the work of digitizing such a vast amount of documents on time and without injury to a single page could be considered a miraculous accomplishment.

The Boles Fire, which burned for seven days, and consumed 479 acres, was not a particularly large conflagration in terms of the California wildfires. However, it was large enough to alert people to the need to preserve their most important records in places where no natural disaster could harm them.

eRecordsUSA specializes in providing document scanning services in San francisco ca. Would you like to receive a free quote to archive your books? call +1.855.722.6669 or email us at info@erecordsusa.com.

The team at eRecordsUSA digitized all my business school course readers on a quarterly basis into high contrast, easily readable and searchable pdf documents. Ideal for reading and studying on my iPad. Thank you for great consistent service with a fast turn-around time!

Taking on thousands of pages of Genealogy Records requiring delicate, one-by-one scanning, eRecordsUsa and their personnel performed with precision and thoroughness to create beautiful results for us! I am deeply indebted to eRecordsUsa for his help with this project, as are my clients. Geyer-Smith Family.

My wife authored a book published in 1999. The The book is out of print and there are still brisk sales of used copies so she decided to publish on Kindle. eRecordsUSA in Dublin California scanned a perfect copy of the book ready for publication, no flaws to fix we were on Amazon\'s page within two hours. I highly recommend eRecordsUSA. They do it right the first time.

eRecordsUsa recently scanned 4 valuable 9x12 highly classified lab notebooks for Cloud9. The quality of the scans were amazing considering that the notes were written by hand and drawn in pencil 8 to 10 years ago. It is much easier now to read the scanned documents then the originals. Special care was also taken to replace and dismantle the original bindings and stapled on papers with the lab notebooks returned to us in perfect condition. I recommend eRecordsUsa services for quality of work, fas...

As a member of the Sequoia Audubon Society of San Mateo County, we asked eRecords USA to scan old newsletters into PDF searchable files. They successfully scanned 2,853 pages representing 421 files. The newsletters were scanned in B&W at 400 dpi. Prior to beginning the project, eRecords USA provided us with a written estimate. They initially estimated the project to take 4-6 weeks but the project was completed in just 2 weeks. During my initial meeting with eRecords USA, Sharma took the time to ...

I cannot speak highly enough of the quality of service I received from eRecordsUSA . I had a bound volume of my grandfather\'s memoirs in handwritten Yiddish that had to be scanned. The pages were non-standard size and each page had been written in a different intensity of ink, so the pages had to be individually scanned.eRecordsUSA met with me in person, immediately understood my needs - and my concerns - and turned the project around in record time and on a highly professional level, exceedin...

I had three, thick books scanned by these folks and was impressed with the attentive customer service, the turn-around time, the quality and the price was extremely competitive! I had scanned three textbooks my father wrote and were out of print by the publisher and thought it would be nice to preserve his works electronically for other generations of food scientists to use. Highly recommend them for any of your scanning needs and definitely recommend them to anyone with scanning needs

I must commend the services of eRecordsUSA.com for the superior scanning job they did for me. My job was to scan 16 huge binders of photos and documents for a theater. This was an unusual scanning request which required a lot of individual attention to each item that was scanned, and the order of the items was important to be preserved. I was very satisfied with the job that was delivered and the turnaround of the job. Not only was the final scanning of excellent quality, but the return...

Our experience with eRecordsUSA was an absolute pleasure. They were very professional in their treatment of our family historical journals. Prior to scanning, they went the extra mile in showing us their processes and provided samples for our review. They worked with us through iterations in resolution requirements and treatment of the historical documents. They delivered on time within the quality standards that we set. We are very pleased with the results and look forward to engaging with...